I thought it was a horrible piece of flying since three airports were in close proximity.

But, then, twenty minutes later, most of us saw for ourselves a second airplane slamming into the South Tower, and exploded like a ball of fire.

This was no accident.

It was a deliberate act of aggression.

Thirty-five minutes later a third plane crashed into the Pentagon leaving a gaping hole in its side.

The fourth plane crashed in a field in Shanksville, Pennsylvania. 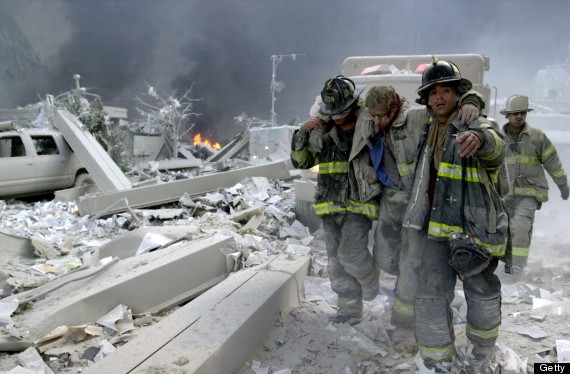 And the World Trade Center was gone for good.

Americans of sixty national backgrounds were in the towers.

But as horrific as that was, the terrorists struck every one of us.

This morning, my dear friends, I am crying again, while at the same time, my heart swells with respect and deep gratitude for the New York City Fire Departments(FDNY).

Ten House(fire station next door) arrived first and rushed into the Towers.

Over the past 6 months, I have met more than 600 firefighters throughout Alabama, Texas, and Florida.

I look into their eyes and every time I see the same single-minded commitment as the brave ones in New York.

We stand and raise our voices to shout our praise to them, to sing our love to them, to honor their sacrifices, and to continue the sweet melodies of their lives.

We proclaim the land where they died a sacred place, where they showed us a degree of vulnerability far beyond our imagination.

Living well and loving courageously is our best revenge.

BTW-(If this is something that you would like to support, please visit us at www.ryanshines.com or follow us on FB and IG @dawnraymondhirn)